Our stories. Find out more about our work towards the Sustainable Development Goals.

Story
25 January 2023
Reflections of Resilience: A Photographic Journey of Activism Against Gender-Based Violence
Under the theme of “UNITE! Activism to end violence against women and girls”, the United Nations Women Liaison Office for the GCC (UN Women) and the United Nations Refugee Agency (UNHCR) joined efforts for the 2022 campaign to produce a photo exhibition in the UAE, during the 16 Days of Activism Against Gender-Based Violence; which is a campaign that has been active since 1991. Starting on the 25th of November of each year, coinciding with the International Day to Eliminate Violence Against Women, the campaign continues for 16 days and ends on the International Human Rights Day on the 10th of December each year. While the fight for ending all forms of gender-based violence is an all year mission, the 16-days campaign is a reaffirmation for the world to scale its efforts, as it calls on governments, civil society, women's organizations, youth, the private sector, the media and the entire UN system to come together to address and put an end to the global scourge of violence against women and girls. “The concept of violence against women is not limited to physical or physical abuse, rather its concept extends to include all manifestations of discrimination against women and deprivation of their human rights.” “One in three women will experience violence at least once in their lifetime. And in times of crisis, these percentages increase, as shown by the COVID-19 pandemic and other humanitarian crises, conflicts and disasters caused by climate change.” Gender-based violence disproportionately affects women and girls, and in situations of displacement, their risk of exposure to gender-based violence increases. With UN Women's mandate and UNHCR’s primary purpose to safeguard the rights and well-being of refugees and people who were forced to flee, both organizations strive to ensure that women and girls, and particularly those in vulnerable contexts, are protected against gender-based violence. The UN Women-UNCHR joint exhibition in Abu Dhabi, featured photographs that captured women from around the world, who were subject to different forms of violence. Through the photography lens of professional photographers, powerful stories of resilience are unraveled aiming to change the narrative by speaking up against it. “The costs of violence against women are very high. They include the direct costs of services for the treatment and support of women victims of abuse and their children, and for the prosecution of perpetrators of such abuse and indirect costs such as loss of work and productivity as well as psychological pain and suffering.” Along with the photographs, the exhibition included quotes that introduced the audience to the “16 Days of Activism Against Gender-based Violence” campaign and its mission and objectives. The quotes also highlighted the different forms of violence that women and girls face, as it also emphasized on the harmful repercussions of violence on the lives of women and girls. It also provided solutions on ways to combat all forms of violence against women and girls. The joint exhibition was featured during a two-day high level event, under the title: “The Arab Declaration for the Elimination of All Forms of Violence against Women and Girls”. Organized by the UAE National Human Right Committee in cooperation with the UN Women Liaison Office for the GCC, the League of Arab States and the General Women's Union, the conference focused on exchanging best practices in combating violence against women and girls regionally. Millions of women around the world continue to suffer from violence in various forms. UN Women elaborates on how the 16 Days of Activism Against Gender-Based Violence awareness activities and interventions can change attitudes and influence people's behavior to prevent and eliminate violence against women at the local, national and international levels. Activities range from government campaigns to inform women about existing laws to prevent and punish violence, to holding meetings at the community and village levels on the negative effects of violence against women, to projects involving men and boys in combating violence against women. Orange the World: Do you know why orange is the official color for this campaign? Globally, the orange color was chosen for the campaign, because it symbolizes a bright future free from all forms of violence based on gender around the world. Several monuments and important buildings around the world lit up in orange each year to send a message that violence against women is unacceptable and must end now. Since 2018, UN Women in the UAE has led the coordination with government partners and other institutions such as the General Women's Union and the Ministry of Foreign Affairs and International Cooperation and various partners, to ensure that many iconic buildings across the UAE, such as Burj Khalifa and Dubai Frame, are lit up in orange in solidarity with the campaign. UN Women also launches an annual social media campaign inviting partners from all sectors to pledge their support and participate by taking concrete action to end violence against women and girls globally. Join the movement and learn more on how you can raise awareness.
Read more 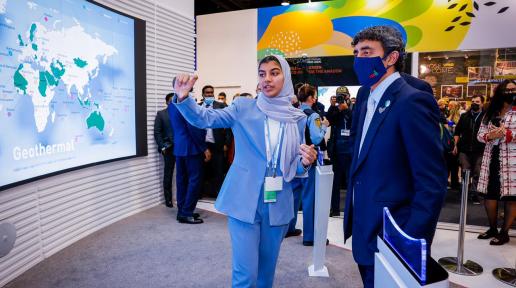 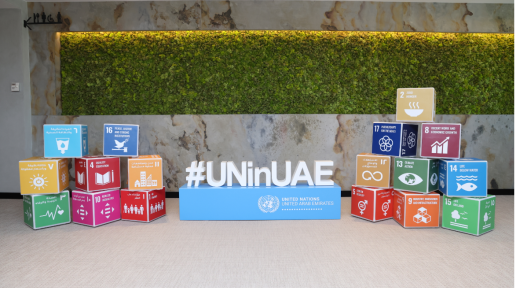 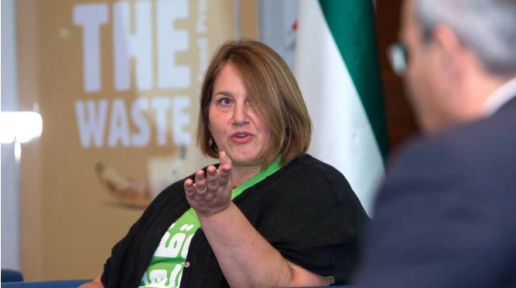 Story
29 September 2022
The National: Climate change is a battle for the future of the human species, warns UN official 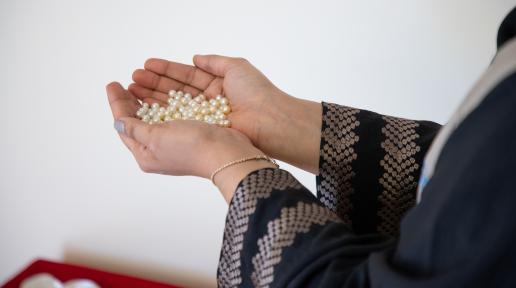 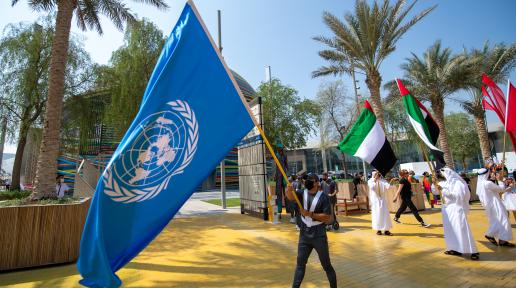 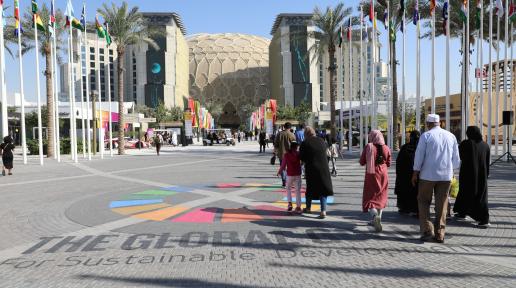 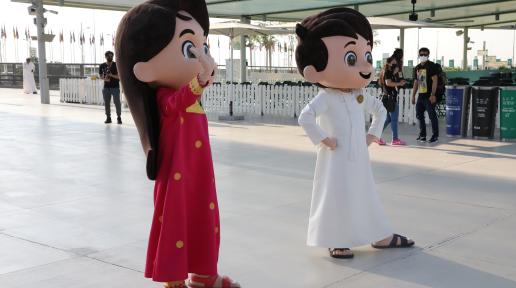 Story
18 May 2022
The SDGs: A Bright Future for the World's Children 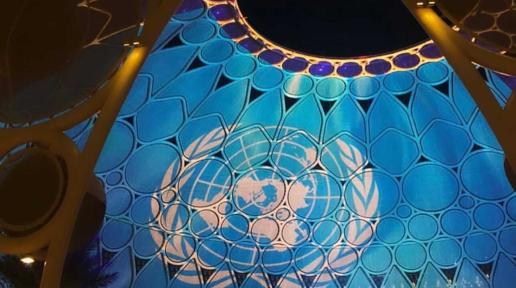 Story
18 May 2022
United Nations at Expo 2020 Dubai: A Call for Global Action for a Sustainable Future 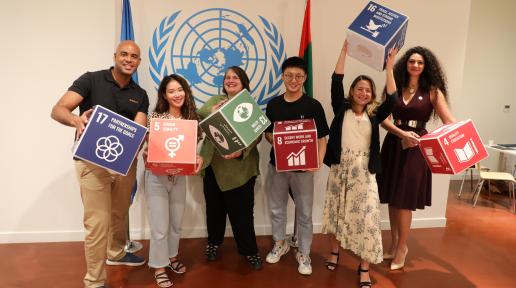 Story
24 March 2022
How Are Youth Volunteers Playing a Dynamic Role with the United Nations at Expo 2020 Dubai? 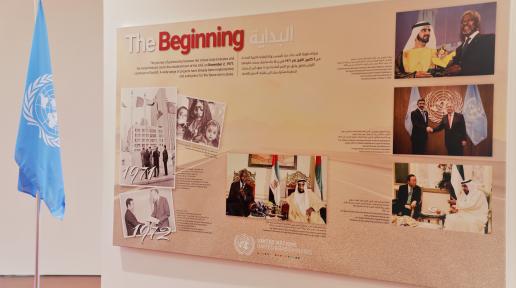 Story
22 March 2022
50 Years of Strategic Partnership: The United Nations and the United Arab Emirates Working Together for a Better Future 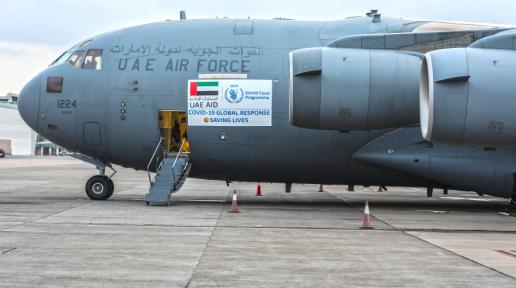 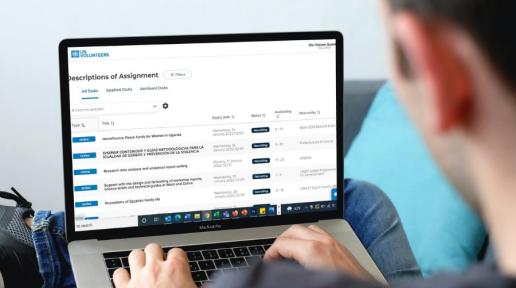